Penulis Dr.Harry Diterbitkan October 14, 2019
Tags
Health
The Western diet is not high in vitamins, especially when it comes to vitamin D. The deficiency of any vitamin can cause serious health issues, so people should incorporate more vitamins in their diet instead of searching for medicines whenever they feel sick.
The following 8 common diseases have been scientifically related to the chronic deficiency of vitamin D: 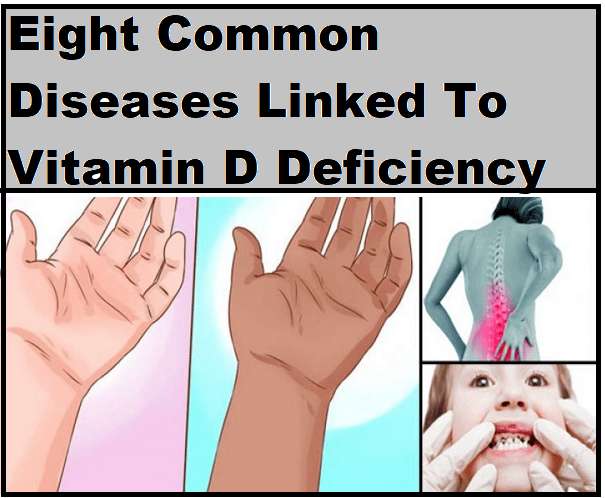 1. Rheumatoid arthritis
A study conducted in Canada discovered that there is a strong link between rheumathoid arthritis and vitamin D deficiency. The scientists claim that people who had the lowest blood plasma levels of 25(OH)D were up to 5 times more prone to RA-related diseases than others.

2. Inflammatory Bowel Disease (IBD)
According to some studies conducted in the U.S, Europe and India, there is a relation between increased rates of ulcerative colitis, Chron’s disease and some other forms of IBD and the reduced levels of vitamin D. The results from the research showed that people who leave in areas where there is an increased natural sunlight exposure, have managed to reduce the rates of IBD and vice verca.

3. Cancer
People who lack vitamin D in their organism are at higher risk of developing various cancer types like breast, ovarian, endometrial, esophageal, colorectal, renal, prostate and gastritic cancer. So make sure to maintain you vitamin D levels in balance.

4. Type-2 Diabetes
A study conducted in 2011 was published in the Journal AIDS which showed that the deficiency of vitamin D worsens the symptoms of metabolic syndrome in the case of HIV. Moreover, according to the researchers, maintaining increased levels of this vitamin via supplementation and sunlight exposure will lower the risk of type-2 diabetes in general.

5. Hypertension
Another study published by the Journal of Investigative Medicine discovered that people dealing with hypertension fared better in the case of increased vitamin D levels.
Moreover, an increased blood serum levels of 25-hydroxyvitamin D (25(OH)D), which is a marker of vitamin D, helped to modulate vascular inflammation and other high blood pressure indicators.

6.Asthma
Recent study discovered that the deficiency of vitamin D is the main cause for asthma, especially when it comes to children. The lack of this vitamin lowers the intensity of the asthma symptoms and also relieves the inflammation which, this restricting the airways and causes breathing difficulties.

7. Influenza
As you all know, during winter, the exposure to the ultravioloet B rays is minimal which is the main reason why the influenza rates are the highest. Moreover, vitamin D is extremely important since it strengthens the immune system and as a result it maintains it in optimal levels and can fight flu and different infections.