And now I have a pretty and stylish storage and organization solution for my bathroom! (Mason Jar Bathroom Storage & Accessories)

Penulis Dr.Harry Diterbitkan November 27, 2018
Tags
Beauty
I’ve seen these painted and distressed mason jar bathroom storage and accessories sets on Etsy for the past year or so and have to admit I’ve been intrigued. My first concern has been durability. Especially if you’re using craft paint. It’s water soluble. And even with a top clear coat, I worried that they finish would eventually wash off. Or peel off. Which has made me reluctant to try my hand at creating this mason jar bathroom storage set. You’ll admit the finish isn’t permanent. But it’s much more durable than craft paint. Especially after you give it a clear sealant coat.

1. Give your jars two coats of Amy Howard One Step Paint in your choice of color; let dry completely between coats.

2. After the second coat dries overnight, distress the raised lettering on the mason jar. I use 80 grit sandpaper.

3. Finish it with two coats of a matte finish sealant. This is my go to product that I found at the online shop.

For the toothbrush holder, I used a mason jar lid insert that is meant for a flower arrangement.
For the soap dispenser, I purchased the lid converter kit from an online shop. And that’s it. The smallest jar is a 4 oz. quilted jelly jar. The cotton balls are in one of Ball’s Elite Collection jars (1/2 pint).
Happy Pinning :)

Penulis Dr.Harry Diterbitkan November 27, 2018
Tags
Beauty
The importance of a good night’s sleep isn’t lost on any of us. Besides keeping the mind healthy, it also plays a huge role in making sure you’re looking your very best. And while a solid eight hours of beauty rest can go a long way, why not put those hours spent in bed to good use and get even more gorgeous overnight? These 4 beauty and hair tips work while you sleep, so you just need to lay your pretty head down and wake up looking like new!

1. Wash Your Face:
The best of beauty products won’t make a difference if you don’t start with a clean slate, so always wash your face before going to bed. Keep a stash of cleansing wipes in your bedside table for a quick fix on those exhausting late nights.

Get rid of acne without any harsh chemicals. Honey and cinnamon are natural remedies for killing bacteria, zapping away zits as you sleep. (via Beautiful by Nature)

3. Aloe Vera:
In addition to soothing a nasty sunburn, aloe vera is also another great natural remedy for curing acne. Use aloe vera gel as a spot treatment or as an overnight moisturizer that keeps skin soft but not greasy. (via Mind Body Green)

4. Cold Eye Cream:
You may already be applying your eye cream religiously, but did you know it works better when it’s cold? Keep your eye cream in the refrigerator and apply before going to bed to decrease morning puffiness.

Penulis Dr.Harry Diterbitkan November 26, 2018
Tags
Fitness
why I’m writing this article and why you’re here. I love yoga, you love yoga, now let’s use the beautiful practice to heal our bodies and reverse all that damn sitting! 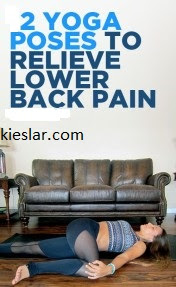 
Benefits: Stretches the back muscles and glutes, massages the back and hips, hydrates the spinal discs, and lengthens, relaxes, and realigns the spine.
Cautions: if back pain or back injury is a concern, bring both knees together and twist to your body’s comfort. 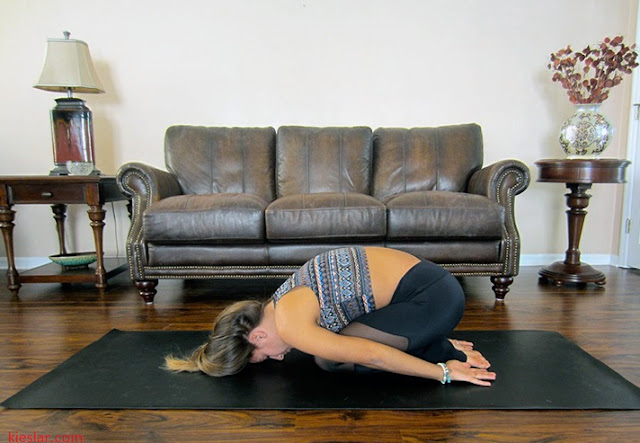 Benefits: helps relax and rejuvenate the entire body, encourages forward flexion in the spine, hips, and knees. Considered a resting pose that centers calms, and soothes the body.
Cautions: avoid if experiencing knee injury or recovering from a recent knee injury.
Happy Pinning :)

WHY SUGAR IS BAD FOR US ?

Penulis Dr.Harry Diterbitkan November 25, 2018
Tags
Health
Do you take an extra spoon of sugar in your tea or coffee every morning? Do you like to sip on soft drinks too often? There is some bad news for you. You are consuming a sweet, slow killer every day in the form of sugar. Whether that is regular sugar or added sweeteners, sugar has been proved to be a dangerous item that affects the human body in a number of ways that you surely aren’t aware of. Though the debate has been ongoing for decades, recent research have finally nailed it – yes, sugar is bad for you!

It increases cardiac risk:
While high cholesterol and fat were considered to be the most harmful for cardiac health, sugar isn’t far behind in that race. It has been proved that sugar affects the cardio-vascular activities and increases the risks of a heart attack more than 30%. Sugar, taken in any form, has been identified as a silent killer.

Increase insulin resistance:
Higher consumption of sugar can cause cells of your body to become resistant to insulin, thereby impeding the regular functions of insulin, the most important being the absorption of blood sugar (or glucose) by the cells and its use. Naturally, glucose remains in the blood stream and gives rise to a number of prolonged diseases like cardio-vascular diseases, obesity, metabolism syndrome and type II diabetes.

Increase cancer risk:
Since the body cells become insulin resistant, it becomes impossible for the hormone to prevent uncontrolled cell growth in the body – a condition that is the stepping stone to cancer. What is more, the inflammatory properties of sugar also act as a trigger for cancer in the body.

Increases calorie intake:
Fructose has much different effect on the satiety centers of the brain than glucose. While glucose intake triggers proper activity in the satiety center, fructose intake doesn’t. Naturally, the feeling of hunger persists even after sufficient amount of food has been consumed and this leads to over-eating and thus more unwanted calories in the body.

Can be addictive:
Who could even think that something as negligible as sugar could be addictive! But the truth is really disheartening. Sugar is indeed addictive and this is because the consumption of sugar causes excessive release of dopamine (one of the neurotransmitters) that creates the feeling of pleasure.

How to prevent an angora sweater from shedding all over the damn place ? 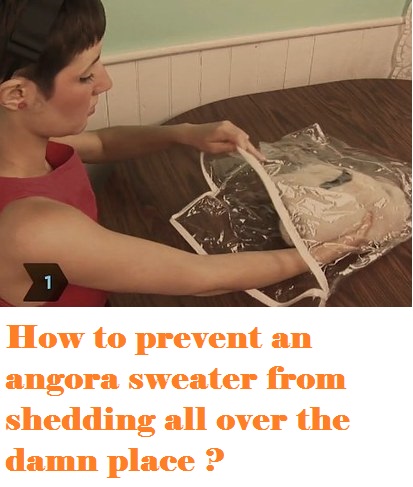 To prevent an angora sweater from shedding all over the damn place, place it in a plastic bag and store it in the freezer for three hours. Shake it after you take it out of the bag to remove excess hair.

How to get rid of pills from an old hoodie or sweat shirt? 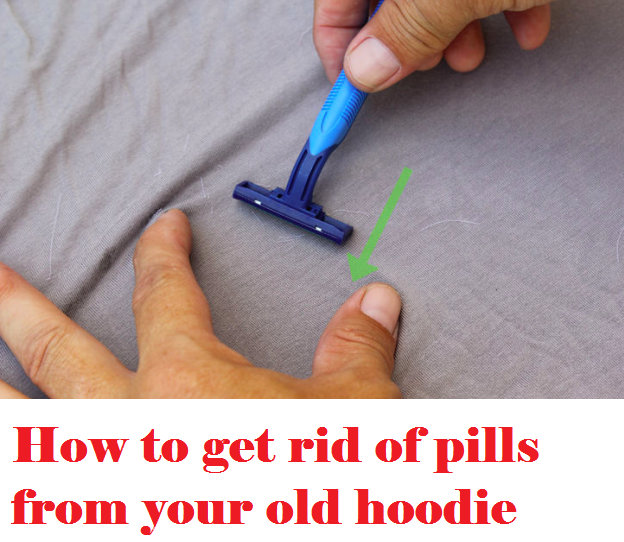 Try a razor to get rid of pills from an old hoodie or sweatshirt.
Continue...

The Secret to Unshrinking a Sweater 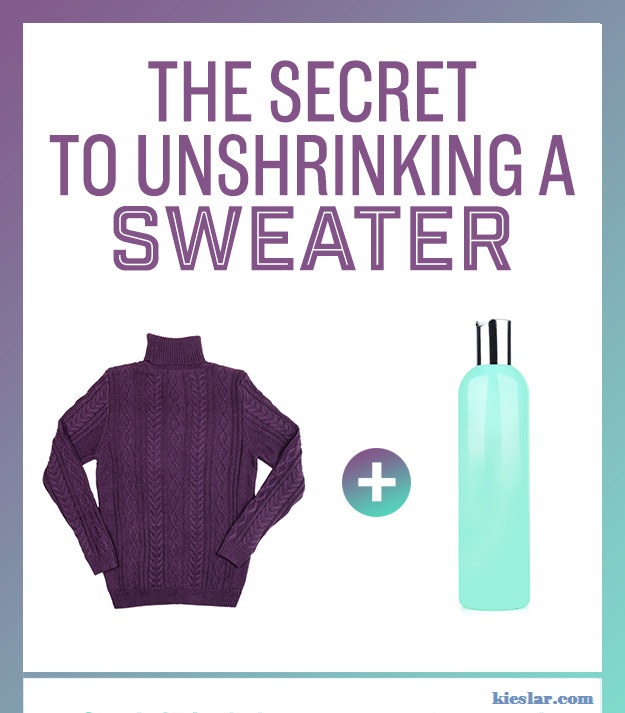 You can un-shrink a sweater, by soaking it in warm water and
hair conditioner for a few minutes.
Continue... 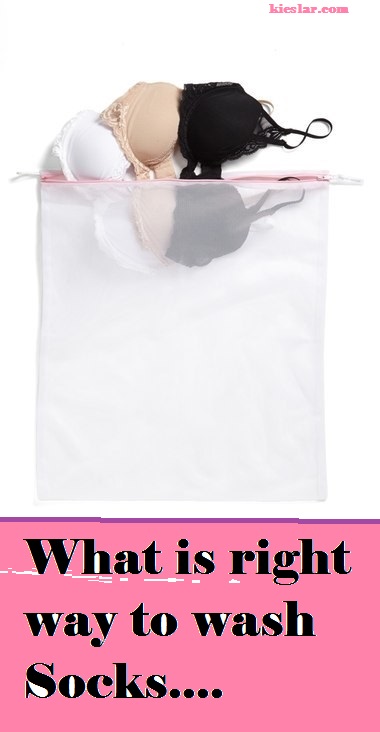 Wash your socks in a lingerie bag.
Continue...

Clothing Hacks when you sat in some gum 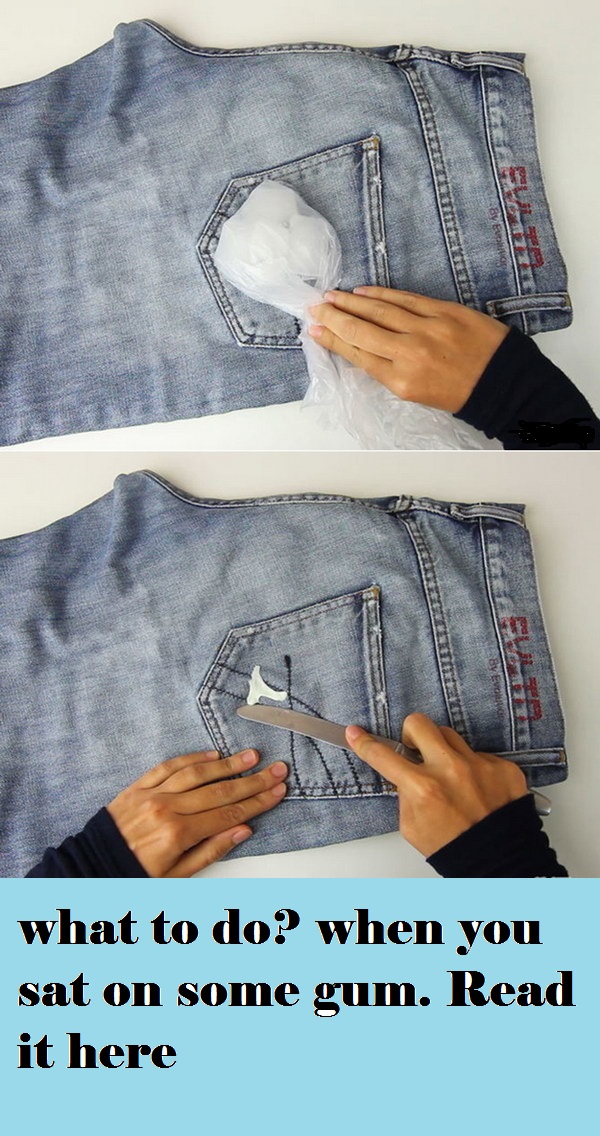 So you sat in some gum. NBD!

Get it out by freezing it and then scraping it off with a butter knife.
Continue...

In Case If your stiff leather jacket isn’t to your liking here is what to do?

If your stiff leather jacket isn’t to your liking, you can loosen it up by getting it wet and stretching in it a bit. 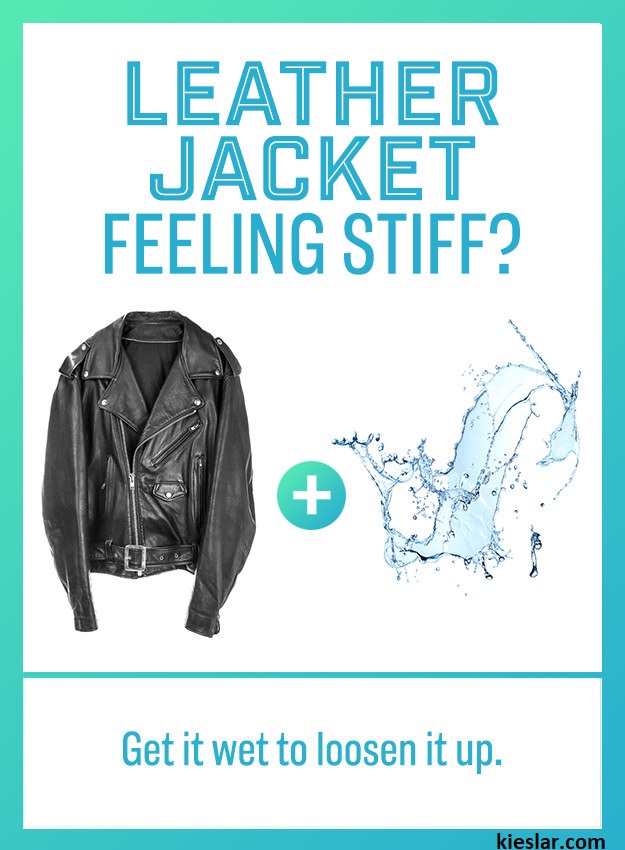 Penulis Dr.Harry Diterbitkan November 01, 2018
Tags
Beauty
2. Get a stuck zipper unstuck by rubbing some crayon on both sides of the zipper. (It’s best to match the crayon color to the zipper) 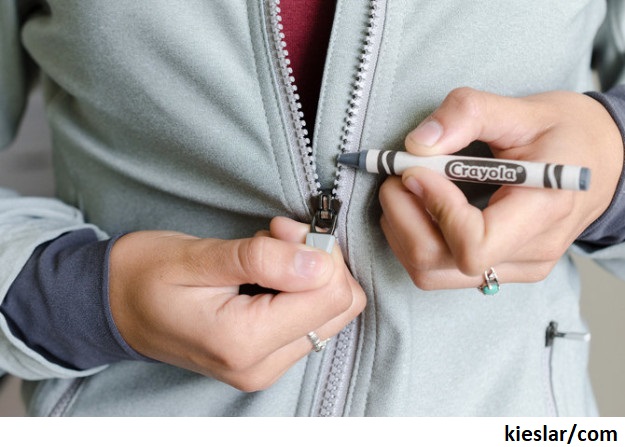 1. Skip the softener but use a little lavender essential oil in your laundry for the best-smelling clothes ever.

Simply add 12 to 15 drops of the stuff to your liquid detergent and mix, before adding to your machine. Here’s more on how to do it. And if you don’t love lavender, feel free to use another essential oil! 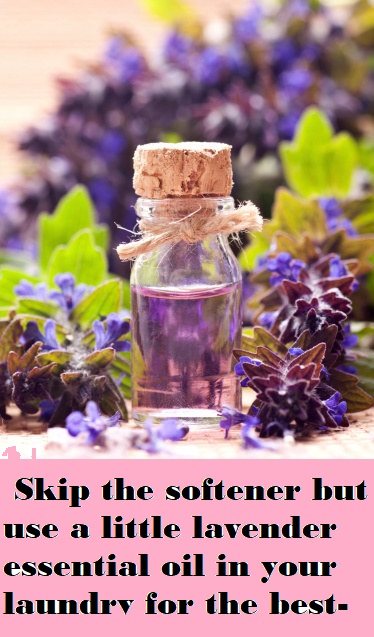 How to Whiten Your Teeth Naturally In 3 Minutes at Home

Penulis Dr.Harry Diterbitkan November 01, 2018
Tags
Health
Products aimed at beautifying your smile line the shelves of drugstores these days. The problem? Many of these teeth whitening products contain chemicals that can be harmful to your health and can ultimately lead to eroding the enamel on your teeth. You can naturally and cheaply whiten your teeth at home using just two simple, all-natural ingredients and a toothbrush. You can brush your way to a whiter smile in just a few minutes’ time, once per week. 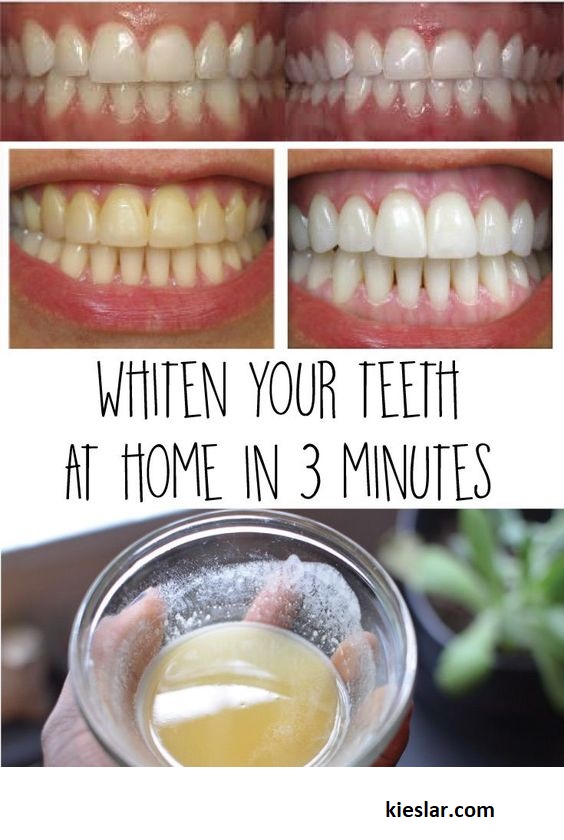 Teeth Whitening at Home – The Method

1. Place a tablespoon of baking soda into a small bowl and squeeze the juice of half a lemon (or half a lime) over the top.

2. The mixture will fizz up as the soda interacts with the citric acid in the citrus juice.

3. Once the fizzing subsides somewhat, take your toothbrush and stir the mixture into a thick paste. If the paste is too runny, add a dash or two more of baking soda until the proper consistency has been reached.

4. Put the paste onto the toothbrush and brush all of your teeth thoroughly, just as you would with regular toothpaste.

5. Rinse your mouth out well with plenty of water, and you’re done! That’s all there is to it.
Happy Pinning :)
Newer Posts Older Posts Home
Subscribe to: Posts (Atom)