Home Beauty what do you know these lipstick facts?

what do you know these lipstick facts?

Penulis Dr.Harry Diterbitkan May 01, 2018
Tags
Beauty
Lipstick and women – the relation is as intimate as you can imagine. There is hardly any woman who doesn’t at all like wearing lipsticks, whether that is daily or occasionally, whether they prefer lighter shades or bright, striking ones. In fact, lipsticks are an indispensable part of a woman’s makeup and are also a mark of her style and personality. Some like to wear it subtly, while others prefer to dazzle everyone with an impressive display of colors and sparkle on their lips.

Though, lipsticks are very commonly available in the market as well as in on-line stores, there are several facts related to lipsticks that most people are not aware of. Given below is a list of the 15 most curious facts that will intrigue you:

Studies show that a woman, on an average, applies about 4 kg of lipstick in her lifetime. Sure, the figure is quite astounding.Women spend about $1780 in buying lipsticks on an average.Ancient Egypt saw both men and women use lipstick, and that too, as a mark of their status. Yes, you read it right – wearing lipstick was indeed a status symbol. Different colors were used, red being the favorite choice.

Things were a bit different in ancient Greece and lipstick wasn’t much used by the higher classes. Instead, it became a mark of the prostitutes – there was a law making it absolutely necessary for a prostitute to wear one.Wearing lipstick during the French Revolution was seen as favoring/supporting the aristocracy.

Elizabeth Taylor, the famous actress, had her own set of rules related to lipsticks – no one, except herself, was allowed to wear red colored lipstick on her movie sets.Surveys indicate that women (about 90%) prefer to wear lipstick not to attract men, but to boost their confidence/morale level.

Lipsticks are considered to be among the most frequently shoplifted items; being small they can be easily concealed.Feminists fighting for the Vote for Women agenda in NYC in 1912 wore lipstick as a mark of feminism and women’s representation.

The shine that lipsticks offer comes from fish scales that are used in the lipsticks. In fact, fish scales have been used in lipsticks since the very beginning and are still used.People in England around the 14th century had a strong belief that lipsticks, apart from being a morale booster, had some magical powers too that could heal people. In fact, when Queen Elizabeth died, she was wearing ½ inch lipstick on her lips. 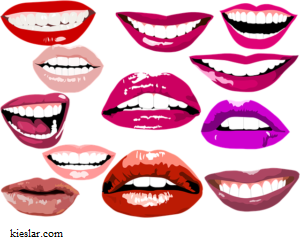 Wearing lipstick isn’t much common in France and it has been found that more than 80% women do not wear it, while more than 90% of the American female population cannot go on with wearing one.
According to the majority of men, women look sexier in red lipstick.
About 30% of the lipstick worn goes to the stomach, more if flavored ones are worn.
A good portion of women feels that lipsticks may help them escape a speeding ticket