Home Health Here’s How You Can Use Peanut Butter To Diagnose Alzheimer’s Disease!

Here’s How You Can Use Peanut Butter To Diagnose Alzheimer’s Disease!

Penulis Dr.Harry Diterbitkan May 14, 2018
Tags
Health
Hey everyone !!
more than five million Americans. Every 66 seconds, someone in the United States develops Alzheimer’s. It ranks as the 6th leading cause of death in the U.S. It’s a progressive disease, worsening over a number of years. As Alzheimer’s advances, it leads to worsening symptoms. They include disorientation, mood and behavior changes, deepening confusion, unfounded suspicions, serious memory loss and difficulty speaking, swallowing and walking.Alzheimer’s can be devastating to those diagnosed, their family members and their friends. There is no known cure for the disease. However, early intervention is often key to a longer lifespan and a better quality of living. Alzheimer’s can be extremely difficult to diagnose in early stages. Having trouble remembering things does not mean a person has Alzheimer’s. Thanks to the University of Florida’s McKnight Brain Institute Center for Smell and Taste, earlier diagnoses of Alzheimer’s may be possible. 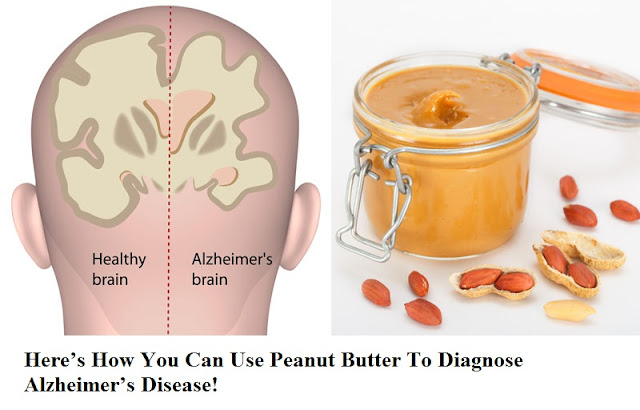 Using just a scoop of peanut butter and a ruler, clinicians have discovered a way to change lives and provide an early diagnosis for Alzheimer’s. They found a way to give millions of people a chance to make more memories. This method of early diagnosis can help predict and address the disease before it becomes completely overwhelming for those diagnosed.
Here’s how it works.

The study involved participants with Alzheimer’s and other forms of dementia. Participants were asked to close their eyes and attempt to detect an odor with one nostril at a time. Researchers used a small container of peanut butter to measure the distance from each nostril that the participants were able to detect the odor. The study found that people with Alzheimer’s disease have a harder time detecting odors from their left nostril when compared to their right nostril.Jennifer Stamps, a University of Florida researcher explained, “All of the Alzheimer’s patients had a left nostril impairment and their right nostril was normal at odor detection which is about 20 centimeters for an older person. Their right nostril was right at 20 centimeters on average but their left nostril was about 10 centimeters on average where they were able to detect it, so there was a big asymmetry there.”

So why peanut butter?

Because it has a strong, familiar smell. People with Alzheimer’s can lose their ability to smell even before memory problems arise. Using this method to detect Alzheimer’s early can help doctors slow down the effects of the disease. The peanut butter test is a faster and cheaper was for doctors to confirm an Alzheimer’s diagnosis.
Happy Pinning:)